How to Rip Blu-ray to Android best playback format

What you can do to kill time on a long distance to work? Watching movies with your Android phone or Android tablet would be a nice choice. If you have a large collection of Blu-ray discs, you can get movies off the Blu-ray discs to your phone or tablet. There is no need to bring the Blu-ray disc and player around you. You can enjoy classic Blu-ray movies on any Android device whenever and wherever you like.

There is nothing better than a free Blu-ray ripper. It is Acrok Video Converter Ultimate that can help you rip Blu-ray to the latest Android device with fast speed and excellent quality. You can also extract audio files within the Blu-ray to Android converter. The batch conversion support allows users to rip Blu-ray movies in a short time. Moreover, you can adjust video and audio settings before ripping Blu-ray to Android playable formats.

Step 1: Free download, install and launch Blu-ray to Android Ripper. Insert the Blu-ray disc into the Blu-ray drive. Click Load Disc on the top toolbar to load Blu-ray disc movies to the program. You can import Blu-ray folder or ISO files to convert to Android too.

Step 2: Unfold the Format list. Navigate to the Android Profile to get the Android tablet and Android phone compatible formats. You can also set the output format from Common Video or HD Video based on your need. 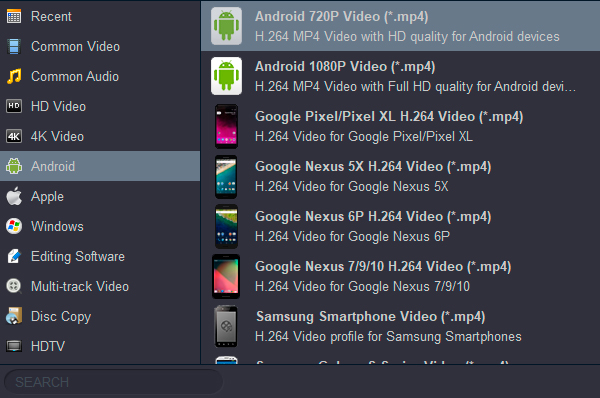 Step 3: Click Settings near the bottom to adjust profile settings. You can click Browse to change the destination folder. At last, click Convert to rip Blu-ray movie to Android devices. When the conversion is done, you can click “Open” button to locate the converted Blu-ray files.

Part 2: Transfer the Blu-ray Movies to Your Android

Now you need to transfer Blu-ray movies to your Android tablet or phone. You can use USB cable to move photos, music, and other files between your computer and Android device.

Since Android is not equipped with a built-in Blu-ray drive, you can use an external Blu-ray player for Android to read Blu-ray discs. Then how about the desktop Blu-ray player? Fortunately, you can use Acrok free Blu-ray player software to play Blu-ray discs on Windows and Mac, as well as popular video formats. No matter you use an internal or external Blu-ray drive, you can watch Blu-ray movies with 100% image quality for free. In addition, you can play disc movies in full, half, normal or double screen modes to get full pleasure.

That’s all for how to rip Blu-ray to Android devices. You can make a digital copy for backup via the above method too. Thus, even though your Blu-ray disc is badly damaged or broken, you can still access the Blu-ray content on any portable device. Be aware that it is illegal to share your ripped Blu-ray movies with others or post the ripped Blu-ray content online. If you still have questions about playing Blu-ray on Android tablet, phone and smart tv, you can feel free to contact us.

1. Can I watch Blu-ray movies on my Android tablet, smartphone?

No, you can’t. Because Android tablet/phone has no Blu-ray optical drive, but it has limited support for some digital file formats. The possibility of watching a Blu-ray movie on Android is to rip your Blu-ray movie to Android supported video format.

2. Can we stream Blu-ray video to Android directly?

Unfortunately, there is no way to insert a disk into the Android tablet and smartphone. However I would recommend using an application like Acrok Blu-ray Ripper software, available for both Windows and Mac and creating a digital version of your Blu-ray, then you can import the movie onto your Android device.

3. Can I connect my Androir device to my Blu-ray player?

4: Can I transfer Blu-ray to my Android tablet directly?

No. You can’t copy and transfer the Blu-ray files to Android device for playing on the go. It’s very clear that if you use external sdcard which is formatted as fat32 it won’t let you copy and transfer files greater than 4 gigs directly onto them.

5. How to connect Blu-ray player to Android tablet?